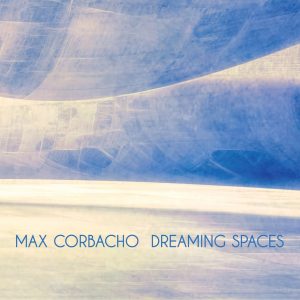 Max Corbacho is a Spanish musician, currently known for his interpretation of ambient spherical music, in which he uses both analog and digital synthesizers and sequencers.

He studied guitar and then worked as a guitarist in various local rock bands. He was influenced by Vangelis, Tangerine Dream, Eno, Roach, Rich and others.

He released his first album Vestiges in 1998. At that time, he was mainly influenced by nature in his native province of Badajoz.

He later moved to Barcelona, ​​where he now works, and his interest shifts mainly to the technical capabilities of synthesizers and their inner world. So he tries to find all the sounds and other possibilities only in them, without using samples. When he succeeds on his recordings, it’s very warm music.

There is only one song on this CD, Dreaming Spaces, over 73 minutes long. It is possible to watch everything I mentioned above on it.

It begins with a harmonious, veiled, dreamy layer that seems to move away and inhale as if inhales and exhales. It is very spatial. It is complemented by a deep drone in the background and a recurring and non-enforcing motif interweaves in individual phrases.

After about ten minutes, everything turns into an indeterminate, sparkling cluster, sometimes rumbling, which after about eight minutes calms down into a deep-bubbling, disappears and a sliding, again obscured harmonic line arrives.

Some higher tones are quite penetrating. However, the composition further develops into a rather thoughtful mood in deeper positions. However, the rhythm is still slow, in sliding hopes. We’re about halfway through the song.

The two atmospheric clusters are amplified and intertwined, but the peace remains, only inside you feel that something is happening. Around the fortieth minute, everything calms down into a kind of sublime chant, but you can still hear everything as if from the background. Increasing and disappearing waves appear in the chant and then intensify. Rhythm and breaths do not change. Around 55:00, the composition becomes clearer and more harmonious, calming down almost to silence, and finally the meditative part begins, with a melody supported by a number of drones.

It is a truly beautiful, positive passage that has the grandeur of a royal procession. And with that we reach the disappearing conclusion. Corbacho worked with the tones, not just letting the machines play.

Although the beginning of the composition seemed rather dark, the end was almost a joyful symphony.
Review by Jiří Mazánek 23/03/2020.