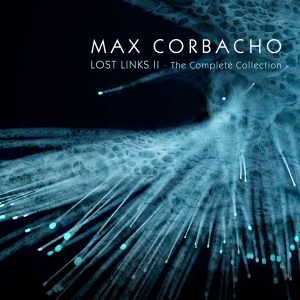 If you were excited about the compilation «Lost Links», released years ago on the Relaxed Machinery label like me, pay attention, because Max Corbacho brings the whole concept again, and enriches it with a complete release of previously unreleased songs on the first half of this double album. On the second half we will find the original «Lost Links» and to make this release even better, we finally have this whole great album available on a beautiful 2CD digipack. Let’s take a look at it!

«Lost Links II – The Complete Collection» develops the idea elaborated in the first part. It brings older unreleased songs to the listener, which either appeared on compilations or for some reason did not make it to certain albums. And that makes me very happy, because especially my very favorite periods («The Talisman» and «Ars Lucis») are contained here to a large extent. On the first CD we will again meet songs from the period of «Ars Lucis» in the form of a beautiful North Rose Alignment and a shorter Beyond Vaults. The majestic Oversoul was released in a shorter version on the «Document» compilation on the Atmoworks label and, for example, Catacombs of Perception is one of the unused songs from The Talisman sessions (as well as the amazing pieces from the second disc Slow Thunder and Third Exposure).

The music performed by this Barcelona master of tranquility is, as always, softly flowing and richly colored meditation, it is spatially infinite. Corbacho evokes the impression of spatiality perhaps like like very few artists can do. Both parts of the album, ie the first nine songs first time released in this form, and the second part containing the original Lost Links contain a diverse range of feelings and colors and beautifully illustrate the nature of the development of Corbacho’s music. Amazing!