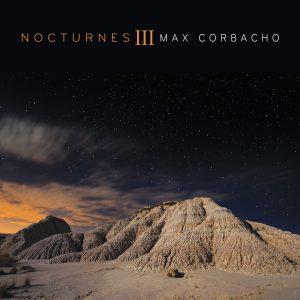 With this third album, Max Corbacho completed the trilogy, which he began publishing in 2017. Its creation was inspired by night photographs, which he created during his meditations in Aragon, in the north of Spain. The strange rock formations fascinated him with their bizarreness, even the hauntingness that stood out especially in the night shots. That’s why he always chose these pictures for the covers of his three albums.

The latter, marked only by the Roman numeral III, brings six compositions, the main ones being the first and the last, which have roughly the same duration of about 20 minutes.

The first composition, Altar of Stillness, has been evolving into this form since 2003 through various reworkings. At night, everything seems a bit different, especially in a landscape with interesting rock formations. There are various ideas, often fears. However, this song does not evoke anything like that. It has a really apt name, because it is an immersion in the atmosphere of this landscape and thus itself. Corbacho chooses very subtle breaths and exhales of its electronic devices that literally caress you. To them are added mysterious sounds as if from elsewhere, from another world, the world beyond what is or is not seen. This makes the sacredness of this rest even more prominent. It is a very sensitive song that will literally embrace you and caress you with its tones.

Apparently, the immobility of the rocks given to them is expressed by the second, roughly nine-minute composition, into which the first passes. This is also expressed as Bonded from Beginning. The calm already established remains, only the color of the synthesizers has changed a bit and added to the bass tones. There is more weight and compactness in the composition.

Again, we move on to the next, shortest song, which lasts less than three minutes, Sleep Time Spores. She deviates a bit with her unusual sound creations and soon moves on to the fourth song of Lunation Sequence. At about night, Corbacho took into account all the influences that affected him, including the phases of the Moon.

He expresses it by the changing crystal tones and also by the kind of restlessness, the instability that is in them. Doesn’t that remind you of women’s moods, which are often influenced by the phases of the Moon? The song is almost ten minutes long. He continues later with such a sprawling of sound, a vague cluster from which tones or even a momentary melodic phrase occasionally peek out. But everything is hidden in the fog of sound.

We move almost silently to the fifth track Time Before Time. Not even a seven-minute song restores calm again, but there is something accelerated in it, it is not resting as if expecting what will follow. The color of the synthesizers is also a bit more aggressive, the phrases follow in quick succession.

In this spirit, we literally step into the last, over 20 minutes long song Skywatchers. I would express the feelings of this composition as a fullness, immobility and admiration for the greatness and grandeur of what we are witnessing.

Corbacho himself remarked on his three albums Nocturnes that the main feelings were silence, the shimmering light of the stars and the sweet scent of thyme that permeated all of Aragon.

My feeling from this album is that I might not document all the feelings, but convey only those that express just that silence, peace and admiration for the greatness and grandeur of this landscape.