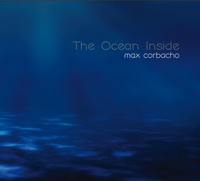 January 2013
Long-form drifting, beatless ambience.
STYLE
The Ocean Inside wells up out of silence in silken mists of tone that imperceptibly condense into an immense ocean of sound that surrounds you before you know it. The initial feeling is warm and softly wondrous; a sense of floatation is well established and you are immersed, carried willingly by tides unnoticed. Tracks segue seamlessly from one into another and so the experience is unbroken, constant, pervasive. Shifts in tone or character are subtle: brighter string sounds introducing currents of sharper intensity; deep atonal pads suggesting descent; choral hints inviting reverie. The seventh track on disc one eventually fades away into silence – allowing the final piece to stand somewhat alone – almost half an hour in length Towards The Bottomless Sea is a velvety minimal tidal impression of great delicacy drawing the meditative nature of this album to an impressive slow-motion conclusion. Disc two continues where disc one leaves off: further exploration of fluid enormity and buoyancy developing this restful opus into near-total absorption.

ARTWORK
A matt-finish double-disc digipack; The Ocean Inside is drenched in deep night blue hues throughout. The subtle panorama that is revealed when all three panels are spread out suggests a body of water of indeterminate extent. Touches of light dapple the lower parts whilst faint beams gently illuminate the higher regions. Text is unobtrusive: titles on the rear with track times alongside; credits on the remaining outer section. Within, nothing disturbs the smooth watery expanse of colour except a single repetition of the title.

OVERALL
The Ocean Inside is the eleventh solo album from Spanish ambient master Max Corbacho. Released via his own ad21 label, this double album sees Max demonstrating the tranquil immensity that this genre can encompass when at its best. The aural equivalent to a vast, vast colourfield painting, The Ocean Inside fills your mental space with densely saturated morphing zones that extend for almost two and a half hours in total. Most pieces are of medium length ranging from four minutes to almost sixteen; the recordings that conclude each disc however are of greater length – twenty-nine minutes thirty-one seconds and twenty-four minutes eight seconds respectively. Max himself says of the music: «More than two years ago I started this project from an Eastern concept that has always been present in my work: the analogy that exists between the mind as an ocean, with constantly changing waves at the surface, and the inner stillness and silence at the depths.» You can hear the music at Max’s official website where there are a range of purchase and download links.