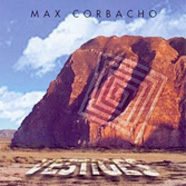 Gliding ambient serenity with hypnotic hand drumming. Max Corbacho’s first CD drifts over the listener like soft sand and silk, weightless wafts and gossamer veils of synthetic tone rising and falling in delicate harmony. The tone is light and dreamy, floatational and airy – atmospheric rather than oceanic, skybound rather than subterranean. The percussive content is confined to the first four pieces – here gentle loops comprised of organic beats with an ethnic flavour roll round evenly, trance-inducing, repeating until a part of the fabric of the environment. As the album progresses the introspective nature of the music increases – the beautiful Erosion lulling and spacious leading into the final three beatless tracks. The shadows pull in somewhat toward the end, Vestiges opening with a twilight moodiness that seems to open into a clear night – the listener a solitary presence in a vast panorama.

Desert scenery, blue skies and windswept grass patches support a huge red rockmass transported from elsewhere. The craggy surface is engraved with an enormous square spiral – a hint of tribal mystery, a futuristic symbol calling to the distant past. The rear cover holds another desert scene where track titles and credits sit in a lightened oblong panel. Inside a two page booklet opens out to extend the front cover photograph – track titles fading into the picture at the far left. The innermost panels are black and white – another desert, pale and drained forming a backdrop to an explanation of the project.

The artwork on Vestiges intentionally places the album in the desert ambient genre – a style that Max Corbacho develops with considerable skill. The album was produced, written, performed, recorded and mixed by Max Corbacho, at Max´s Studios in Sabadell (Barcelona) in 1998. Released on Freerecords, the CD consists of seven mid-length tracks around six to eight minutes each totalling 53 minutes 54 seconds in all. This album will appeal to anyone looking for something buoyant and expansive with tribal beats and smooth synthetic polish.