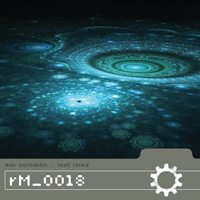 Ambient composer Max Corbacho describes Lost Links as a compilation of “deleted, unreleased, forgotten tracks” which were not included on previous albums. Despite the chronological and conceptual differences this implies, Lost Links portrays a uniform vision and the quality of the music betrays its origin as a collection of unused pieces.

Corbacho’s music is, at least on the surface, spacey and spacious, conveying vast vistas of starry skies and yet it has an earthy quality. Compared to the ambient work of say Klaus Schulze the listener is not so much taken on a cosmic journey as earthbound and contemplating the cosmos. Deep warm synth pads are accompanied by synthesized insect- and bird-like effects. Admirers of the music of ambient pioneer Steve Roach, whose work often evokes the less-explored areas of the world, will gravitate towards this earthiness.

The ambient music of Brian Eno has been described by author Eric Tamm as the “vertical colour of sound” meaning that time slices of Eno’s individual works essentially convey the same atmosphere without much in the way of narrative development. The pieces on Lost Links do not strictly adhere to that school of ambient. Pads come and go to be replaced imperceptibly by other sonic devices, lending a seamless flow to longer pieces such as the 16 minute One True Light.

The ambient music scene has in recent years taken on a much darker edge; unsettling atmospheres, sound design which has been influenced by horror soundtracks. Lost Links is a refreshing collection against this backdrop. It has a very human, emotional component but also a depth and expansiveness which prevents it from being in any way New Age background hum. Play this album loud and you will be enveloped in a huge cathedral of rich and vibrant sound.